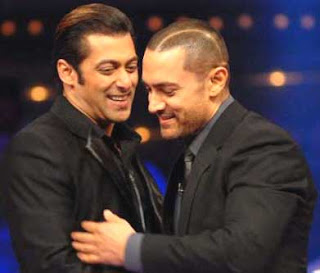 Bollywood star Salman Khan is so impressed with Aamir Khan after watching "Peepli Live" that he has given him the title of "Mr.Midas touch".

'Peepli Live' has a mad-ass touch. Especially the press should see the film," Salman posted on his Twitter page.

"I didn't let Aamir touch me after the film. Agar mujhe gold mein badal deta toh? (What if he touched me and I would have transformed into gold?)," Salman quipped.

"Peepli Live" is a satire on farmers' suicides and it has been directed by Anusha Rizvi and produced by Aamir Khan Productions Pvt Ltd.

The movie is in the spotlight for its slick promos and quirky music.

"EVERYBODY should watch this film. It is comedy, tragedy, khulasa, sansani, breaking news...," said Salman.
Posted by Indiblogs at 6:01 PM