Aishwarya Rai and Abhishek Bachchan to miss Raavan in Venice 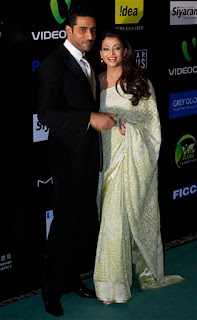 Bollywood couple Aishwarya Rai and Abhishek Bachchan won't be able to attend the screening of their film "Raavan" at the upcoming 67th Venice Film Festival, due to prior commitments with their brand endorsements.

"Raavanan" and "Raavan" - the Tamil and the Hindi versions of the Mani Ratnam film - and Anurag Kashyap's "That Girl In Yellow Boots" will be screened at the festival, starting Wednesday.

"Aishwarya and Abhishek are not going for the Venice Film Festival as reported in some media outlets. The festival falls on the same dates on which they have previously committed. Aishwarya is going for an event for Longines (as she is the brand ambassador), while Abhishek will be busy with a shoot for Omega in Italy," said a source close to the actors.

"There are other film festivals too - Doha and Pusan - where Abhishek and Aishwarya are being invited, to showcase their film or even for individual honours. But the duo will decide which ones to attend according to their schedules," added the source.
Posted by Indiblogs at 6:13 PM