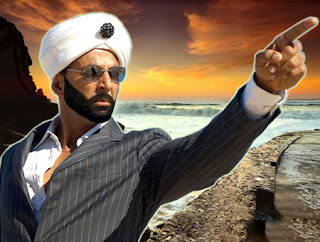 Bollywood star Akshay Kumar, who is busy shooting romantic comedy "Thank You" here these days, says a sequel to his hit film "Singh is Kinng" would be out next year.

The 'khiladi,' who has been chosen as Canada's tourism brand ambassador in India till 2012, wants to shoot more movies in the country and even intends to spend more time in Canada after he retires.

He said he would also shoot his own production "Breakaway" in Canada next month. "It is a cross-cultural emotional family comedy with an ice-hockey background," the Bollywood hero said.

The 43-year-old actor, who has acted in over 120 films, said he would "split my time between India and Canada" once he retires from his acting career.

The action star was chosen for the brand ambassador's role at the instigation of Canadian Prime Minister Stephen Harper, who met him in Mumbai during his visit to India last November, and Industry Minister Tony Clement.

Akshay said though he has been "a big friend of Canada for the past 15 years", he feels privileged to officially promote this country in India.

According to the actor, Indian tourists prefer destinations like New York, London, Bangkok or Los Angeles, but he will try to "put Canada on the map as a tourist destination for Indians" in his new role.

The Canadian Tourism Commission (CTC) has designed promotional campaigns for him to woo tourists from India, he said.

Akshay, who was also given the honour of carrying the Winter Olympic Torch here last December, said Canada is an amazing country.

"A bit cold at times, but very warm and friendly people. Add to this the natural beauty of Alberta, B.C., Halifax, the multiculturalism of Toronto and the unique culture of Montreal, and you have an ideal destination for vacation."

He said he was overwhelmed when thousands of people came out on the streets on Toronto to cheer him during his run with the Olympic Torch in December in minus 20 degrees.
Posted by Indiblogs at 4:00 PM