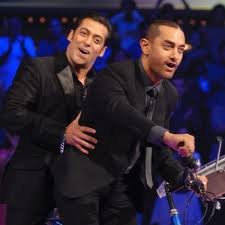 Come October, and Bollywood icons will invade small screen. The festive season in October is usually a time when Bollywood bigwigs fight it out at the box office. But this year will be different, as no less than Amitabh Bachchan, Akshay Kumar and Salman Khan will have television as their battleground.

The three actors will try to drive up TRPs (Television Rating Points) as hosts for three big shows that are expected to hit the small screen in October.

While Amitabh and Salman will be seen in Colors and Sony respectively, Akshay has shifted base to STAR Plus after being replaced by actress Priyanka Chopra for the third season of "Fear Factor - Khatron Ke Khiladi 3" on Colors.

Amitabh, who hosted "Bigg Boss 3" for Colors, is all set to host the fourth season of "Kaun Banega Crorepati", expected to go on air on Sony TV Oct 11, which also marks the megastar's birthday.

When asked about the small screen competition with 67-year-old Amitabh, Salman said: "There is no competition. We are two different personalities, we have different styles; so there is no comparison. I don't think I can host KBC the way he does."

"Kaun Banega Crorepati" is an Indian version of British show "Who Wants To Be A Millionaire". The first season in India, hosted by Amitabh, went on air in 2000 and proved to be an epochal show in the history ofn Indian television. He hosted the second season as well, but was replaced by superstar Shah Rukh Khan in the third season.

Meanwhile, Salman, who used to add spark to Sony's "Dus Ka Dum", has replaced Big B as the host of the reality show "Bigg Boss 4".

Big B is nonchalant about competition and is confident that Salman will do a good job on "Bigg Boss 4", a programme that shows how celebrities survive in a house for three months without any connection with the outside world.

"I am happy that they have taken Salman. I have seen him in his 'Dus Ka Dum' show and he was most innovative and fun. I am certain he will be very good on 'Bigg Boss' as well. The audience loves him as I am certain the inmates of the house will too," said Amitabh.

Akshay, who used to work as a chef in Bangkok before getting a break in Bollywood, will go back to his culinary instincts for "Master Chef India", a competitive cookery show.

Incidentally, all shows will hit the tube in October. But on the face of it competition is not bothering any of them.

As for Akshay's show, STAR India CEO Uday Shankar said: "Our objective is to put together an entertaining show and the effort is to be a one-stop shop for all creative urges. We don't believe in countering individuals no matter how big they are."

For Sanjay Gupta, COO, STAR Plus, the concept of "Master Chef India" is the star.

"What KBC did 10 years back by giving people the hope to be something in life by knowing just a few answers, 'Master Chef India' , in my view, might do the same.

"In this country, at least 50 out of 100 people can cook. We are throwing the stage open and saying...if you know how to cook, come and give an audition and you can be a superstar in this country. What can be bigger and better than this?" Gupta told IANS.

As the small screen prepares for battle royale, only TRPs will decide the winner.
Posted by Indiblogs at 11:18 AM