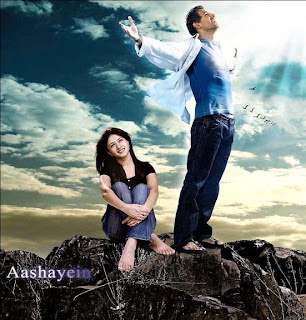 This is a film about coping with dying. But that's not what makes it such a special experience. It's the writer-director's profound understanding of human nature that furnishes the simple story with a lucidity and coherence even when the protagonist's mind is so numbed by physical pain he can barely think straight.

"Aashayein" is structured as a journey from a bright delusory light into a place where the radiance comes from a consciousness of why mortality is not to be feared.

In John Abraham's eyes are mapped the entire history of the human heart, its follies and foibles as it struggles to make coherent the indecipherable logistics that define our journey across that bridge which everyone crosses from this world to the next.

As that very fine actress Prateeksha Lonkar (a Kukunoor favourite) says, "The only difference between the healthy and the ill is that the former don't know when they are dying and the latter do."

Between that state of blissful oblivion where we all think life is forever (and a day) and that one moment when our delusions come crashing down, there resides some very fine cinema. Hrishikesh Mukherjee's "Anand" where Rajesh Khanna smiled his way through that wobbly bridge taking us to the next world, is an interesting reference point in "Aashayein".

I also thought of the actress Supriya Choudhary shouting into the dispassionate mists in the mountains, "I want to live". The echoes reverberate all the way to Kukunoor's heartwarming, funny and elegiac exposition on the truth that lies on the other side of that illusory mountain we call life. Kukunoor pays a homage to life per se, and life as we know in the movies about death.

Even in the most poignant places in the art Kukunoor ferrets out some humour. When John's lovely girlfriend (Sonal Sehgal) hunts him down in his exilic place of the dying, John quips, "So you are not going to behave like one of those heroines in films who dumps the dying hero?"

The fantasy element creeps into the hospice (yes, that's the spotless space that the story inhabits unostentatiously) with the least amount of fuss. There's a little boy (the bright and expressive Ashwin Chitale) who weaves mystical tales borrowed from the comic books for the desperate and the dying. Here Kukunoor brings in an element of rakish adventure borrowed from the edgy hijinks of Indiana Jones.

Who says money can't buy love? John uses bundles of cash to bring a smile to these doomed lives. When he doubles up with pain in womb-like postures of helplessness we feel his pain.

John in Harrison Ford's hat and whip cuts a starry figure. He has never been more fetchingly photographed. John's smile reaches his eyes, makes its way to his heart and then to ours. This film opens new doors in John's histrionic abilities. It's a performance that heals and nurtures.

John's finest moments are reserved for a hot-tempered sharp-tongued 17-year-old girl on a wheelchair, played with intuitive warmth by Anaitha Nayar. He guides the relationship between these two unlikely comrades of unwellness with brilliant restrain and candour. She wants him to make love. He does with his eyes using his unshed tears as lyrical lubricant.

Here is a performance that defines the character through immense measures of unspoken anguish. Rajesh Khanna in "Anand"? Nope. John pitches his performance at a more wry and cynical world where true feelings are often smothered in worldly sprints across a wounded civilization.

This is unarguably Kukunoor's most sensitive and moving work since "Iqbal". We often find little sobs pounding at the base of our stomachs. Not all the characters or situations are fully formed and fructified. But even the partly-realized truths in "Aashayein" convey more common sense and uncommon affection for life than the "entertainers" of today's cinema where laughter is generated through cracks in places very far removed from the heart.

This one takes us straight to the heart.
Posted by Indiblogs at 10:29 AM