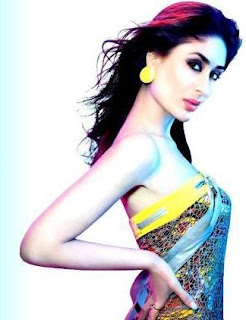 Bollywood actress Kareena Kapoor is the leading woman endorser of the year, according to a report by AdEx India, a division of TAM Media Research.

Kareena had a 45 percent share of celebrity endorsements on television during 2010, says the report.

The actress has featured alongside three popular male celebrities - M.S. Dhoni, Shah Rukh Khan and Sachin Tendulkar. She currently endorses brands like Airtel, Kurkure, Sony Vaio and Gitanjali among others.

"Kareena has reached phenomenal heights. She had the maximum ad volumes of celebrity endorsement (FMCG brands) on TV during 2009 as well," said a source.

As far as movies are concerned, the actress has Karan Johar's "We Are Family", her boyfriend Saif Ali Khan's home production "Agent Vinod" and "Golmaal" sequel.
Posted by Indiblogs at 1:52 PM