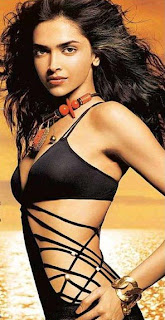 "So this is a love story!" says the wry cop at the end of the film while closing the case that exonerates our hero 'One-Shot Nandu' of accidently blinding Pinky Palkar in a car accident.

Indeed "Lafangey Parindey" (LP) is a love story. And how grotesquely indecorous has been the marketing of this tender and shimmering look at an improbable love in the slums between a free-wheeling boxer and wannabe roller-skating spitfire gone blind.

Deepika Padukone gives to the tale the kind of fluent grace and eloquent spin that the audience associates with the female legends of celluloid, namely Meena Kumari and Nutan. Deepika brings the poignant lyricism of the former and the spirited delicacy of the latter into what's unarguably one of the best-written female characters in recent times.

When Pinky goes blind all of a sudden, she doesn't flutter her eyelashes and trip over furniture like any self-respecting blind diva in our cinema would. She quickly picks up the pieces of her shattered life, and yes, also the rollerskates and leaves home to a sniggering brother's taunt and a concerned mother's encouragement to renew her dreams.

The above is one of the many finely-written and worded sequences in this film suffused with a delicate charm and infinite wisdom.

Neil Nitin Mukesh has a tough thankless role. Not only is he that archetype known as the 'Supportive Lover' in the script he must also move back in every other sequence to let Deepika walk away with the best expressions and dialogues. Neil never over-steps his boundaries. As the shy fighter who needs the blinded sports-girl's clairvoyant spirit to take him on the road to love more than she needs him to cross that traffic-laden road which she can't see, Neil gets the lower notes in the scale of the love symphony right.

While the two protagonists' journey into love via a dance contest ('Rab Ne Banadi Jodi' revisited) takes centrestage in Pradeep Sarkar's deftly-cut material, the peripheral characters also get enough space to have their say aggressively without getting hysterical.

A film set in the ghetto is bound to remind the audience of Danny Boyle's "Slumdog Millionaire" and Vishal Bhardwaj's "Kaminey". Sarkar dodges both and goes for the most unexpected reference points, namely Douglas Sirk's "The Magnificent Obssession" and its desi spinoff Gulzar's "Kinara". As in "Kinara", the hero is on a redemptive route taking the blinded girl through the corridors to her dream. It's a journey undertaken with great warmth, tenderness and loving care.

The dialogues convey a streetside sauciness without getting abusive. Street wisdom need not be eeks-rated.

But hang on. LP is not soft at the edges. Pradeep Sarkar brings to the storyboard a gritty edge-of-the-street desperation that miraculously accommodates a very supple love story.

In a moment that can only be defined as tragic-comic, one of the hero's friends walks away with one of the most expressive lines in this film. After Pinky goes blind the friend says, "Ek minute mein Hema Malini se Thenga Malini ban gayi."

The reference to Hema Malini is not lost in a film that takes Gulzar's "Kinara" to another shore.

The scenes are written by Gopi Puthran with utmost concern for a pitch that conveys high passion without toppling over. Deepika looking into the sky with a lovelorn look in her unseeing eyes asking Neil to describe the moon is a moment that is priceless and poignant.

Cinematographer C. Natarajan Subramanian shoots with loving care. LP is an inspirational tale told with as little fuss and as much feeling as cinematically possible. Not to be missed.
Posted by Indiblogs at 11:04 AM