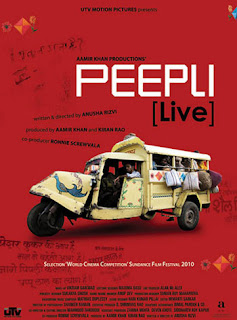 "He will watch the movie tomorrow," an official at the Prime Minister's Office (PMO) told IANS here Saturday.

The official said Aamir Khan will be present at the 7 Race Course Road residence of the prime minister for the screening.

Senior officials have also been invited for the movie, which deals with the issue of farmers' suicides in a satirical manner.

The movie that has been directed by Anusha Rizvi and produced by Aamir Khan has done astounding business in India - in its opening week itself - as it earned about Rs.24 crore. The movie was made on a budget of approximately Rs.10 crore.
Posted by Indiblogs at 10:28 AM