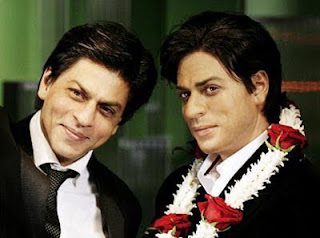 Bollywood megastar Shah Rukh Khan will join the wax figures of the famous at the famed Madame Tussauds at Times Square here Thursday amid a performance by Bollywood dancers.

The colourfully dressed troupe of dancers will perform to the soundtrack from Shah Rukh starrer "My Name Is Khan", one of the highest-grossing Bollywood titles released in the US as Khan's figure is unveiled with the DVD release of the film.

Standing in front of a replica of the Taj Mahal, the star's wax figure will be dressed in a sleek black suit and white button down shirt.

The actor known as 'King Khan' is the latest addition to Madame Tussauds brightly-colored, fully-interactive 'Bollywood Zone,' which allows guests to feel as though they are on a Bollywood film set.

The celebrated Bollywood actor, producer and television host, Khan has starred in more than 50 films throughout his career. The star was also named one of Newsweek's '50 Most Powerful People in the World' in 2008 and has a fan following numbering in the billions.

Now available from Twentieth Century Fox Home Entertainment, the DVD is timed for India's Independence Day and showcases the changing face of Bollywood, the enamouring on-screen partnership of Shah Rukh Khan and Kajol, behind-the-scenes featurettes about the story, music from the film and more.

Described by US media as "A potent, energetic heart-tugger" (Los Angeles Times) and "an affecting fairy tale about the perils of goodness" (New York Times), the film relates the story of an Indian man with a unique way of looking at the world.

The protagonist Rizwan (Shah Rukh) moves to San Francisco and meets a vivacious single mother named Mandira (Kajol). They form a special bond and fall in love against all odds, but fate and tragedy conspire to tear them apart.

Just when it appears as though all hope is lost, Rizwan embarks on a remarkable journey across America to win back the love of his life.
Posted by Indiblogs at 5:30 PM