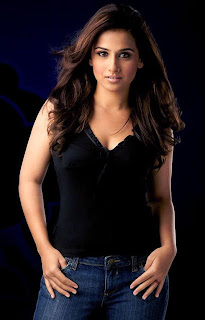 Vidya Balan's plans of performing a complex Mohiniyattam dance for Santosh Sivan's Malayalam film "Urumi" have been postponed due to her shoulder condition. The actress says she can't dance until she is fully recovered otherwise she may have a life-long shoulder problem.

"This has happened all because of my own stubbornness," said Vidya whose gym trainer had warned her against rigorous exercises.

"But I didn't listen to him. Now I can't dance until I am fully recovered. I still haven't forgotten the impact of my classical number in 'Bhool Bhulaiyaa'. The one in Santosh's film would be far more sensuous and intricate."

Vidya has a chronic shoulder condition which got aggravated after she insisted on going to the gym before it had healed completely. She has now had a relapse, leading to this excruciating pain.

"Now I've to wait out, I've no option. Otherwise I'll have a life-long shoulder problem. I can't wait to start rehearsing for Santosh Sivan's dance number."

Though Vidya is a trained classical dancer, a Mohiniyattam guru has been specially hired by Sivan to teach her nuances of the dance form before she performs it for filming.

Vidya's training was to start this week. Her spirit and her feet are willing -- but the body is too weak to take the vigorous dancing.

"I was in so much pain I couldn't do any of the normal things, let alone dance," she said.

Speaking on the much talked-about item song, she said: "It's more talked-about than actually performed. I was supposed to start preparing for it this week. Unfortunately I've been down with a painful shoulder condition for some time. And completely forbidden from doing anything strenuous."

Vidya describes it as a fusion dance.

"Since I was born in Kerala my family is so looking forward to my foray into Malayalam films. I thought a song is a very good place to start. Moreover, I totally admire Santosh Sivan's work... who doesn't?"
Posted by Indiblogs at 2:54 PM