Aamir Khan is happy with response to Dhobi Ghaat 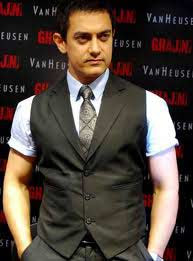 The film, which was shown at the Elgin Garden Theatres in Toronto, received tremendous acclaim from the audience present.

"Thank you to all of you who came to the screening and for giving such a warm welcome to the 'Dhobi Ghat' team. Thank you so much guys it was most overwhelming. We are having a great time at TIFF. And we are all most relieved that people seem to be liking the film," Aamir posted on his blog

Aamir is playing the lead role of a painter in the film. Apart from him Monica Dogra, Prateik Babbar and Kriti Malhotra also star in the film.

I might get into direction in the coming years: Sonu Sood

Bollywood actor Sonu Sood, who is riding high on the success of his latest film "Dabangg", revealed that he might consider direction in the future.

"I might get into direction in the future. During my years in the industry, I have learnt a lot of technicalities of filmmaking, so I might utilise that knowledge someday," the actor told IANS.

Akshay and I bring the best in each other: Vipul Shah

Filmmaker Vipul Shah, who has given four hit films with Bollywood actor Akshay Kumar, says that they bring the best in each other.

"As an actor, Akshay would love to work with some other talented director too, which is nice, as a director, I have always enjoyed working with Akshay. Sometimes you try to do something different things also, but it is true that Akshay and I bring the best in each other," Shah told reporters here.

The two have teamed up for "Action Replayy", scheduled to hit the screens soon.

"Action Replayy" is their fifth film after "Aankhen", "Waqt: The Race Against Time", "Namastey London" and "Singh Is Kinng".
Posted by Indiblogs at 3:42 PM