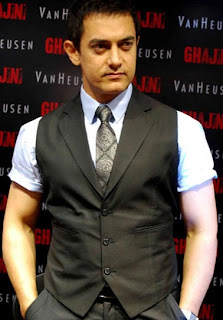 Bollywood superstar Aamir Khan is so fond of films of the 1950s-60s that he wishes he was an actor in that era, which he describes as the golden period of Indian cinema.

"To me the 1950s-60s were the golden period of Indian cinema. During that time the creative talents be it director, actor, lyric writers, composers, writers and in every department used to be excellent," Aamir told reporters at PVR Phoenix Mill, where he came to attended the screening of "Teesri Manzil" in Purani Jeans Film Festival organized by Radio Mirchi.

"I think that people during that time were more passionate about filmmaking," he said.

"All old films I see, I feel that I should have worked in them. 'Teesri Manzil', 'Guide' and the list is unending. They are so fantastically made. I wish I was born during that period," he added

The actor was all praise for the radio station's initiative for screening Indian classics.

"It's a great opportunity for the youngsters today to see these films, made by such talented people, great artistes, performers, directors, writers and composers. This is actually our treasure," said Aamir.

"In every period of time different kind of talent has come in Indian cinema. So it's quite difficult to compare one period of cinema with the other," he said.

"I don't think that now there is any dearth of talent. It often happens that we like older things, as there is a nostalgia value. But I think that talent at that time was really special. But today's talent, like me, is privileged and proud to belong to this lineage of talented people," said Aamir.
Posted by Indiblogs at 12:02 PM