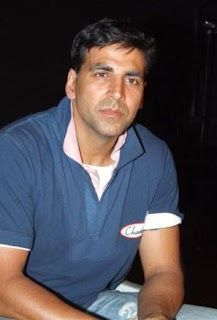 It will be family time for Bollywood actor Akshay Kumar when he ushers into a new year of his life Thursday.

The actor, who turns 43, Thursday is planning to spend time with his family on his birthday.

"I'll be celebrating my birthday with my family. We'll be going out to a nice place to eat. I work to live life to the fullest. So hoping to spend some nice time with my family," Akshay told reporters here.

Akshay, who is married to Twinkle Khanna, has a seven-year-old son. He has appeared in over 90 Bollywood fims. He made his acting debut with the 1991 film "Saugandh".

During the 1990s, Akshay acted mostly in action films like "Khiladi" (1992), "Mohra" (1994) and "Sabse Bada Khiladi" (1995), and was particularly known for his appearances in feature films commonly called the "Khiladi Series".

In 2008, the University of Windsor in Ontario, Canada conferred an Honorary Doctorate of Law on Akshay in recognition of his contribution to Indian cinema. In 2009, he was awarded the Padma Shri by the Indian government.
Posted by Indiblogs at 11:52 AM