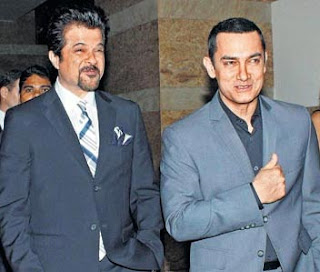 Anil Kapoor and Aamir Khan got nostalgic at the launch of Indra Kumar and Ashok Thakeria's next project "Double Dhamaal".

"Anil and I have very fond memories working with Indra and Ashok. As an actor, I have done three films with Indu. We wish all the very best to the whole team and I am looking forward to a highly entertaining film," Aamir told reporters at the launch of the movie at the Mehboob Studio Wednesday.

He teamed with Thakeria and Kumar in "Dil" and "Mann".

Anil, who worked with them in the super hit "Beta", said: "Indra and Ashok are like my brothers. They are in the field since I started my career. The first film I did with them was 'Mohabbat'. The mahurat was also in Mehboob Studio."

Walking down memory lane, Anil said when Kumar decided to turn director with "Beta", he was sceptical about doing the film.

"When Ashok told me that he wants me to do a film which will be directed by Indra, I was a bit taken aback. Still, I agreed to do 'Beta', but had a dates problem.

"That time 'Qayamat Se Qayamat Tak' became a big hit and Indra told me he wants to make a film with Aamir. I thought it's a great idea - he is a new director, so he would gain some experience while working with Aamir and then I will do a film with him.

"So I started encouraging him to make 'Dil'. That time I didn't know that any director with whom Aamir works will become a big hit and that the film will be a blockbuster. I was under pressure. But even 'Beta' was a blockbuster and we continued to be great friends since then," said Anil.

"Double Dhamaal" is the sequel to "Dhamaal" with the same star cast - Riteish Deshmukh, Sanjay Dutt, Arshad Warsi, Javed Jaffrey and Aashish Chaudhary. Actresses Kangana Ranaut and Mallika Sherawat will also feature in the film.
Posted by Indiblogs at 4:43 PM