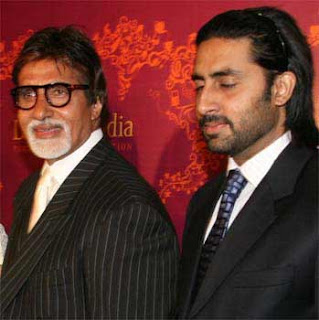 Bollywood megastar Amitabh Bachchan says Abhishek is more of a friend for him than a son and that he loves spending time with him.

"…when I sit with Abhishek and spend time with him, they are the most glorious moments. He is my friend first now, and a son later. This I had decided even when he had not been born. Would I to be the father of a boy, he would be my friend. Decided," Amitabh posted on his blog www.bigb.bigadda.com.

Amitabh and Abhishek, who have featured together in films like "Bunty Aur Babli", "Kabhi Alvida Naa Kehna", "Sarkar" and "Sarkar Raj", and "Pa" rarely get to spend quality time with each other due to their hectic schedules. But they live it up whenever they get the chance.

"Spending quality time with your son! I did today with mine and it was most rewarding. Sometimes we forget that the little fellow that I first saw in a crib soon after he was born has now flourished into a full grown adult, ready to take on the challenges of the world, ready to give opinion and ready to fight on your side!"

"I have always enjoyed these warm and affectionate moments. They give a sense of strength and togetherness. Of being in the company of one that is your blood, one that shall stand by you, give suggestion but diligently obey and protect you," posted the 67-year-old.

Amitabh also has a daughter, Shweta, who is settled with husband and two children in New Delhi.
Posted by Indiblogs at 3:07 PM