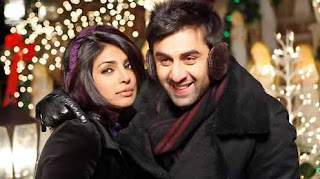 The release of Ranbir Kapoor-Priyanka Chopra starrer "Anjaana Anjaani" has been postponed from Sep 24 to Oct 1 in view of the verdict in the Ayodhya case, due the same day.

"At first I was in a position where I needed to go ahead with the release on the slated date. However, there is no denying that the Ayodhya isssue is much bigger and needs respect," producer Sajid Nadiadwala, of Nadiadwala Grandson Entertainment Pvt. Ltd, told reporters here at the Mehboob Studios.

Directed by Siddharth Anand, the film has been co-produced by Eros International.

"Ranbir had addressed the issue to me and Eros and we gave it much thought. Ranbir is, of course, one of the most looked upon youth icons of our time and his point was a much sensitised and valid one.

"After having mutually discussed it with Eros, we have decided to release the film Oct 1. The film is a very happy one and celebrates life, hence releasing it on a peaceful day would be preferred. I am sure people's good wishes are with us," he added.

Giving her nod to the decision, Priyanka said: "This was our wish that the date should be postponed. I think it is the matter of principle. Whatever happens, we should go through this day in a very peaceful way. It is a very important day for India and we should all be together to give the day its deserving importance."

Adds Ranbir: "Well, I hope whatever be the verdict, peace be maintained. That was a nightmare for us. The verdict shouldn't be biased and should be in favour of all Indians."
Posted by Indiblogs at 4:54 PM