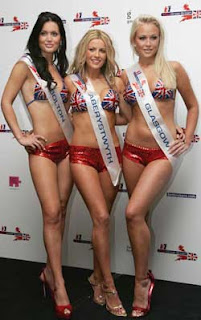 A beauty queen has been thrown out of the Miss Great Britain contest after she was found to have posed topless and worked at a massage parlour that offered sex services.

Laura Anness, 27, was crowned Miss Plymouth City recently and was gearing up to participate in November's national beauty pageant.

The Sun reported Thursday that pageant organisers were not aware that she had in 1999 posed topless as a teenager and worked in a massage parlour offering sex services.

Laura, from Saltash, Cornwall, had been stripped of another beauty pageant title contest earlier this year for lying about her age.

She then went on to enter Miss Great Britain, where the rules clearly say that participants must have never posed naked or been involved in prostitution.

Email ThisBlogThis!Share to TwitterShare to FacebookShare to Pinterest
Labels: Hollywood