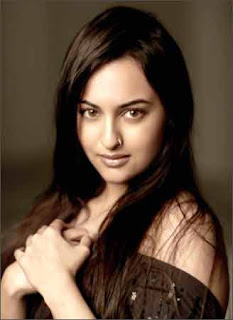 Bollywood actress Sonakshi Sinha, who was seen as a demure rustically dressed Indian girl in her debut film "Dabangg", came all out in a totally western and outgoing avatar at Narendra Kumar Ahmed's show at the ongoing Lakme Fashion Week (LFW).

"Nari is one of my favourite designers and walking the ramp for him is an absolute pleasure. I have always admired his style and clothes and after 'Dabangg' this is for the first time, I am in a western look and Killer jeans has done a wonderful job," Sonakshi told reporters here.

The 23-year-old actress, who wore lehengas and sarees in "Dabangg" was sporting denim jeans and top, coupled with a hat at the show of Narendra Kumar, fondly called Nari's association, with clothing brand Killer.

Sonakshi oozed confidence and was extremely casual while sashaying down the ramp. The actress who was formerly a fashion designer herself, even broke into a slight dance and seemed to enjoy the music to the hilt.

When asked about the status of her career in designing, the actress said: "That unfortunately has taken a back seat. Designing is a very demanding job and so is acting, so if I try doing both, I will be nowhere, better I stick to one."

"My mom really wants me to launch a brand, but nothing anytime soon. I have studied it, invested so much of time. No education goes waste, so definitely sometime in future," she added.

The line which was labelled Killer Nari drew inspiration from the contemporary style icons Kate Moss and Gisele Bundchen.

The collection entailed designs both for men and women. While the collection for men contained 1980's inspired sport jackets, shirts in bold contrasting polka dots and check prints in pop art with stylised jeans, the women collection mainly comprised jeans and shorts with casual tops and t-shirts.

"What we have tried to bring fashion into jeans unlike jeans being a fashion itself. And now we have the perfect muse for the line. And the way today Sonakshi walked the ramp, she was absolutely fantastic," said Nari.
Posted by Indiblogs at 5:14 PM