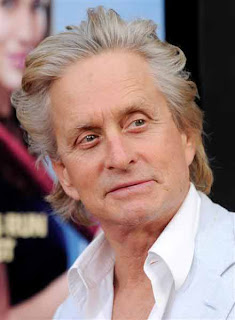 Hollywood actor Michael Douglas has been optimistic about his throat cancer treatment, but the stress and strains of radiotherapy and chemotherapy have begun to show on his face.

Within four weeks of the treatment, Douglas looked frail as he was taking his seven-year-old daughter Carys to school in Manhattan, reports dailymail.co.uk.

His face looked drawn and tired and he looked as though he had lost a bit of weight - a possible result of being unable to eat properly because of the cancer treatment.

Recently he had revealed how the treatment has left him with sores in his mouth which make it extremely difficult to eat and swallow.

Still, Douglas, who was dressed in shorts decorated with palm trees, laughed and joked with his daughter.

He has been attending premieres of his film "Wall Street: Money never Sleeps".
Posted by Indiblogs at 3:58 PM