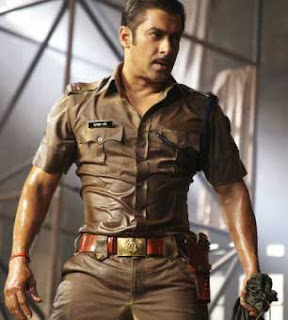 Superstar Salman Khan did it last year with "Wanted" and he has done it again now - he has set the box office on fire as corrupt cop Chulbul 'Robinhood' Pande in his latest outing "Dabangg" that has collected Rs.48.25 crore (gross) at the opening weekend. And trade pundits say it has beaten the initial earnings of Hindi cinema's highest grosser "3 Idiots".

Aamir's "3 Idiots", which released last Christmas, on the other hand, raked in approximately Rs.41 crore gross including paid previews which lacked in the case of "Dabangg".

The film's success has not only benefited Salman, but establishes his brother Arbaaz Khan as a successful producer.

"The audience response of 'Dabangg' has really humbled me... 'Dabangg' is the biggest grosser of all time for the weekend. Shattering all records everywhere. I'm so proud of Salman and my entire team. Kudos (sic)," Arbaaz, who turned producer with the movie, posted on Twitter.

"A special thanks to all the audiences who have embraced and loved the film to make it so huge... also to the many critics who have given very good reviews."

"Dabangg" turned out to be a lucky launch pad for Sonakshi Sinha, the daughter of veteran actor and politician Shatrughan Sinha, as the movie has been appreciated both by "masses and classes".

"It has broken all records. It is running 30 percent ahead of '3 Idiots' and has been appreciated both by masses and classes across both multiplexes and single-screens," Delhi-based distributor Joginder Mahajan, told IANS.

"The movie has got an Eid effect as it released in the festive weekend. It has no competition as earlier releases didn't do well and there is no big release in the coming week too. These are rare circumstances that we see in the Indian film industry," he added.

"All shows for the movie have been housefull starting from Sunday till Monday afternoon. We have been playing 29 shows of the movie and the response has been very good. Everyone is liking it," Amit Awasthi, senior manager (Programming and Operations) of Spice Cinemas, told IANS.

"In just three days, the movie has crossed Rs.2.1 million at Spice whereas '3 Idiots' had collected only Rs.1.85 million. However, with no big release this week, we are optimistic that the movie will definitely go places, though during weekdays, we are expecting less collections compared to the weekend," he added.

Yogesh Raizada, corporate head (Cinemas) of Wave Cinemas, is also happy with the initial box office response -- however, he is sceptical about the week ahead.

"It definitely had a stronger weekend collection than '3 Idiots' but now all we have to see is whether it is able to sustain the collections. With no many big releases around the corner, we are hoping that it will," he said.

Distributor Mahajan is also not sure "Dabangg" will beat the overall record of "3 Idiots" that grossed over Rs.450 crore.

" 'Dabangg' won't have an overall '3 Idiots' effect because that one had a very good word of mouth and people came to watch it with family. But you can't recommend this one to your father or your elders, you can just watch it once and get entertained," said Mahajan.

"Then '3 Idiots' maintained its business in the second and third week but this one doesn't look that promising," he added.