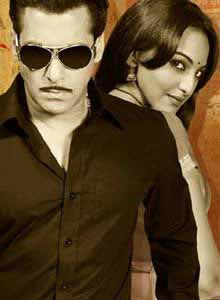 Salman Khan starrer "Dabangg" has hit the bull's eye at the box office and the film's producer Arbaaz says they are planning to celebrate the success.

"Yes, we're going to have a celebration very shortly. So far because of the way 'Dabangg' has gone, we haven't been able to plan out full details. But yes we will invite all our friends and colleagues. We want to share our happiness," said Arbaaz.

There are many firsts attached to "Dabangg" - this is Arbaaz's first production venture, Abhinav Kashyap's first movie as a director and it also launched Sonakshi Sinha as an actress.

For Arbaaz, "Dabangg" is not only a family achievement, but a personal triumph too.

"To be finally recognised for my work is a feeling I can't describe. Personally, I had never dreamt the film would become so big. If you say the film has been a success because of the way it was marketed and because Salman is liked in action roles, I'd have to disagree. Salman went all out for 'Veer' as well," he said.

"As for action, yes 'Wanted' was a success in the action genre. But not to the extent of 'Dabangg'. Besides action 'Dabangg' had the comic element, great music (by Sajid-Wajid) and the girl (Sonakshi Sinha) has been immensely liked. Who knows what it is? All I know is that me and my family are looking at one of the biggest hits of the industry and we'd like to believe the entire industry shares our joy because a hit of this magnitude means prosperity for the entire industry."

When asked about the guest list for the impending bash, Arbaaz said: "Ideally, we'd like to invite everyone in the film industry. But that would mean a guest list of 15,000 to 20,000 people. We can't manage that. So we'd restrict ourselves to all our friends. Trust me it would be quite a list."