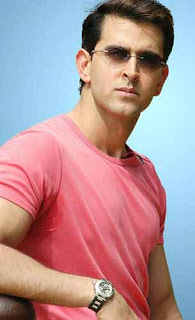 The first look of "Guzaarish" was unveiled here Thursday and Hrithik Roshan, who reportedly plays a magician suffering from paraplegia, says working in director Sanjay Leela Bhansali's film was like a life-changing experience for him.

"It's true that I have not done anything that has been life-altering. This film has changed my perspective towards work, changed my life. It's so beautiful that 30 years or 40 years from now, I will look back and will smile that I had the opportunity to make this film," Hrithik told reporters at Cinemax, where the first look of "Guzaarish" was unveiled.

"When such a vision, it feels that some films are made for just to see and this is one of that kind, so I just jumped at it," added the star whose last outing "Kites" couldn't excite the box office.

He has teamed up with Aishwarya Rai in the movie - this is his third film with the actress after "Dhoom 2" and "Jodhaa Akbar".
Posted by Indiblogs at 3:45 PM