Hirani, Chopra get 3rd National Award for 3 Idiots in a row 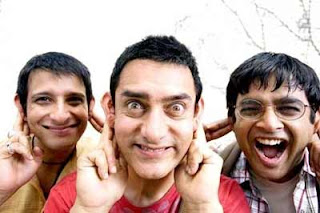 "3 Idiots" was Wednesday declared the most popular film providing wholesome entertainment at the 57th National Film Awards and proudcer Vinod Chopra says it's a very proud moment for his production house.

This is Rajkumar Hirani and Chopra's third national honour as director and producer respectively. Earlier their films "Munnabhai M.B.B.S." and "Lage Raho Munna Bhai" too had won the national award.

"It's an overwhelming feeling. I have just returned from the US where I was working on pre-production of my next film. I landed here two days back and I am welcomed with such an overwhelming news. It's really a proud moment for our production house," said Chopra.

Hirani added: "It's extremely humbling when the audience loved and cherised this film so much and now we are also getting recognised by getting a National Award."

Swanand Kirkire was declared the Best Lyricist for penning the song "Behti hawa sa" for "3 Idiots".

Aamir Khan starrer "3 Idiots" had broken all records by grossing over Rs.450 crore.
Posted by Indiblogs at 4:11 PM

Email ThisBlogThis!Share to TwitterShare to FacebookShare to Pinterest
Labels: 3 idiots