Hollywood Actress Sandra Bullock is the one I want to work with: Ryan Reynolds 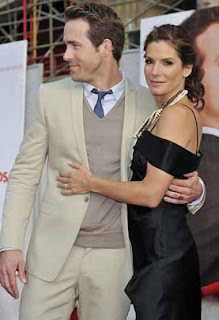 Actor Ryan Reynolds wants to reunite with Oscar winning actress Sandra Bullock for his next film.

"Me and Sandra have been friends for a long time and I'd love to make that happen. So maybe down the line. Look, there could be something in development but there's no script as yet," he said.

He starred with her in "The Proposal".

Ryan, who is married to Scarlett Johansson, has been friends with Sandra for over a decade and insists she is one of the nicest people he has met in Hollywood.

"My producing partner is incredibly close with her (Sandra). I met Sandra through him about 11 years ago and we've been good friends ever since. I never thought we'd do a film together, but it worked out," femalefirst.co.uk quoted him as saying.

However, Sandra's spokesperson Kevin Huvane has shot down the reports insisting nothing had been agreed.

"She is simply attached to the project, which is currently in development. This is not her next film.

"There are several projects of many different genres that Ms Bullock is presently considering and has not committed to any of them at this time," he said
Posted by Indiblogs at 4:14 PM