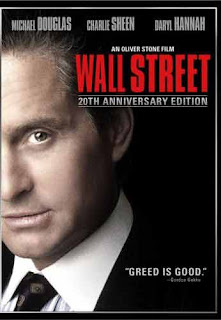 "Wall Street" in 1987 defined the greedy, materialistic America of its time, a place where everything was okay as long as it led to financial success. It turns out, with its sequel, that nothing much has changed, that whereas once "greed was good, now it's legal" even when financial bubbles all around burst.

"Money Never Sleeps" begins with the release of Gordon Gekko (Douglas) from prison. He holds a grudge against a man due to whom he spent a longer term in prison than was needed.

But if you thought his greed had subsided due to stay in prison, after the first half, you'll realize that now it's only bigger and stronger, mixed as it is with vengeance.

The smart investor manipulates his own daughter Winnie (Mulligan) and her wall street executive beau Jake (LaBeouf) to ride the financial wave once again, even as the financial bubble collapses in 2008.

It was obvious that the global financial meltdown of the last two years would provide the setting for this film. But where it scores, is in its departure from the first. America of Oliver Stone, and otherwise too, is still what it was, only the financial meltdown, gives Stone the opportunity to tell his audience of what is truly important in life, time, love, children and family.

Fans of the first "Wall Street" would be a little disappointed with the slower pace of this one and it's moody, reflective nature. But the bursting of the financial bubble hopefully left audiences with enough time and thoughts to reflect on things that are moneyed, and those that no money can buy - true love and family.

To go beyond the money, Stone introduces some interesting quirks in his characters. Gekko's estranged daughter now runs a little website that digs for the truth. And though she falls for an investment banker, she disapproves of his avarice and greed. And when she gets pregnant and realizes how her hubby had cheated her, she keeps him away, wanting to keep greed away from the one yet to be born.

Therein lies Stone's message and hope for our materialistic society: That perhaps the new generation will discard the greed of their fathers and better the world.

The cast does well in the hands of Stone, who also shows his adeptness while taking jibes at the new way of doing business on Wall Street, where computers and impersonal statistics take away the little human interaction of the past. He also uses techniques he hasn't used before like split-screens and long camera pans.

Stone uses obvious analogy in the film of falling dominoes and bubbles to depict the current situation. And he hits the bulls and the bears right between the eyes, when he makes the comment about a collapsed system for which "everyone is responsible".

That's what the world has indeed come to. And in the morally ambiguous Gekko, one is left wondering whether he is entirely to be blamed or are we equally responsible for what has happened to the world? The answer won't be an easy one.
Posted by Indiblogs at 4:52 PM