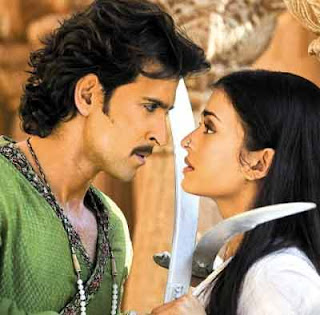 The crackling screen chemistry between Hrithik Roshan and Aishwarya Rai was evident once again in Sanjay Leela Bhansaali's "Guzaarish", the first look of which was revealed here Thursday. After "Dhoom 2" and "Jodhaa Akbar", they seem set to create magic on celluloid once more.

The two teamed up for the first time in the 2006 hit action thriller "Dhoom 2". From critics to audiences, everyone raved about their on-screen chemistry and the two repeated the same in the historical romance "Jodhaa Akbar".

The teaser of the film, co-produced by UTV Motion Pictures and Bhansali, was extremely impressive thanks to brilliant cinematography and interesting music by the director himself.

Hrithik, continuing his long hair and beared look from "Kites", looked attractive in the teaser, while Aishwarya exuded elegance and panache.

The look of the film is artistic and creates an old world charm.

In the film, Hrithik plays a magician suffering from paraplegia , while Aishwarya will be seen as nurse who is estranged from her husband. Releasing Nov 19, the film will reportedly touch the controversial issue of mercy killing.

With the failure of "Saawariya" at the box office, "Guzaarish" might do wonders for the director. At least the first look suggests so.
Posted by Indiblogs at 3:51 PM