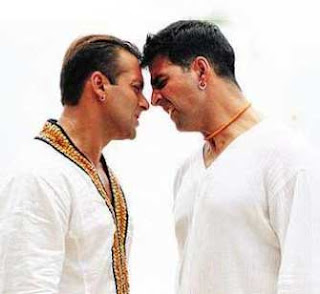 "Looking forward to our shoot after so long... Enjoy brother," Akshay posted on Salman's Twitter page.

Akshay is playing the lead along with Katrina Kaif and Salman will make a special appearance in the song. "Tees Maar Khan" is scheduled for a December release.

Meanwhile, Akshay also took the opportunity to congratulate Salman on the success of his latest release "Dabangg".

"Salman you are in your elements man! You have given everyone a reason to dance this Eid," wrote Akshay.

Akshay and Salman earlier featured together in films like "Mujhse Shaadi Karogi" and "Jaan-E-Mann: Let's Fall in Love... Again".

Former beauty queen and actress Gul Panag is on the jury of the Kazan International Muslim Film Festival to be held in Russia.

"Off to Russia to be on the jury of the Kazan International Film Festival. Looking forward," Gul confirmed on her Twitter page.

The sixth edition of the film fest is being held Sep 15-19.

American actor Adrien Brody, Egypt film star Elham Shakhin, and Iranian film director Shakhriyar Bakhrani will be among the other guests at the event.

The usually slim and trim Shruti Haasan says she needs to regularize her workout regimen to get back into shape.

"Going to work out starting today! I have been a very bad girl and not worked out properly in two months!!! Got to get back in some kind of shape!" she tweeted.

The 24-year-old, daughter of veteran actors Kamal Haasan and Sarika, made her Bollywood debut opposite Imran Khan in "Luck".
Posted by Indiblogs at 2:55 PM