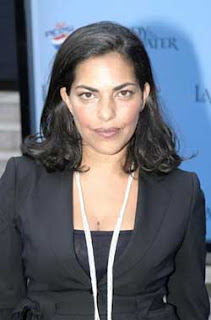 Raised across the globe and living out of a suitcase, Indian origin actress Sarita Choudhury, best known for her role in "Kama Sutra", wants to shift base to India to make her life "culturally rich". She also wants to learn an Indian language but isn't sure if Bollywood is the place for her.

"I was raised around the world. I wasn't raised in America but my work has been there and you start wanting to draw from where you come from. There is a limit to that and that's what it is," Sarita, 44, told IANS in an interview here.

"I want my life to match my work now. I don't want to work and then travel. I want to be at one place," added the New York-based half-Bengali, half English actress.

"I want to (shift base to India). People think I don't want to come back. They think I want to be in America as it has been really good to me. But I need something more culturally rich now," said Sarita, who travels everywhere with her seven-year-old daughter Maria.

Sarita, who was also seen in Mira Nair's "Mississippi Masala" apart from "Kama Sutra: A Tale Of Love", is in the country to promote her latest outing "For Real". But she has been to India many times earlier.

"My parents live in Kolkata so I come every year. I've been to (film) festivals; so I do end up coming but always for a short period."

However, it is film capital Mumbai that has caught her fancy.

"I haven't been out on the streets enough, but even driving through (there)... I just love it. Bombay is a port city - it smells of sailors and ships and palm trees and dirt - it just has everything beautiful," she said.

"Bombay is kind of tropical and then there is the film industry. Everyone is out late at night and there is so much action going on. There is life in your face there.

"For an actor, it is a very interesting place to pick things from and put into your role...which is why I kind of like New York," she added.

So is Bollywood the next destination?

"I would do Bollywood, but I don't know if I could do that - the dance, the singing, the kind of flirting with your eyes, the outfits...But I guess it's changing. I can totally do the independent cinema here."

Having worked with Mira Nair, is she aware about other Indian filmmakers?

"Sudhir Mishra, Vishal (Bharadwaj) and Anurag (Kashyap). I've met them at festivals in other countries but I am never there long enough. Every time I say I'm interested (in a project), I then leave. So no one really thought I'm serious.

"So what I have really thought to do is to take six months, come and live here and just be available," said Sarita.

She also conceded it was time she learnt an Indian language.

"I have decided now that it's time I learnt Bengali may be...but Hindi would be useful," said the actress who speaks French, Italian and English.

Her upcoming project "For Real" has been written, directed and produced by debutant Sona Jain. Shot in Delhi and New York, the English language movie is about an imaginative six-year-old girl, who, because of the ensuing depression in her parents' life, starts believing her mother (Sarita) is an alien from a different galaxy. Having won laurels across the world festival circuit, it is releasing here Friday.

"It is really interesting because it's from her (the child's) perspective and how they use fantasy to deal with real issues...It's an important film for people living here (India)," said Sarita.

As for her future projects, "I am trying to work more in India and Europe now and try and give some time to that," said the actress, who also plans to pen a script some day.
Posted by Indiblogs at 4:48 PM