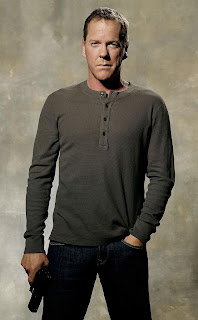 "He (Sutherland) wants to come to India for charity work. He wants to see India and do social work. He is very keen to come here," Anil told IANS over phone from Mumbai.

"He knew that I was associated with an NGO called Plan India; so he said 'I'd love to come to India and take part in an activity for children there.' So he might have a look at that," added Anil, 50, who plays Omar Hassan, president of a fictional Islamic Republic of Kamistan (IRK), in the eighth and final season of the show.

Based in New York, the action thriller stars Sutherland in the lead as special federal agent Jack Bauer. Presented in the semblance of real time, each 24-episode season covers 24 hours in the life of Bauer.

Despite sharing screen space with him for the first time, Anil was all praise for Sutherland who has been doing the show since 2001.

"What I like about him is that he has been doing this for the last nine years, and still his commitment, energy, enthusiasm and the way he works on the sets, it looks as if this is his first season and he has just started his career. He has got that kind of commitment," said Anil, who shone on the global firmament with his performance in multiple Oscar-winning "Slumdog Millionaire".

"He (Sutherland) is still child-like and he wants to do his best despite working for so long on the same show. He brought a certain kind of freshness every time he gave a shot," he added.

Having shot the show in Los Angeles on and off for six months, Anil also imparted education about India to the "24" cast and crew.

"They are so enamoured, curious and waiting to explore India. They are completely fascinated with our country.

"I did my best to convince them, brief them and educate them and tell them about India as country, its people, religion and political scene as in how democratic we are like them. Then I briefed them about the entire Indian film industry - the fun and humour part of it and the serious part of it," said Anil.