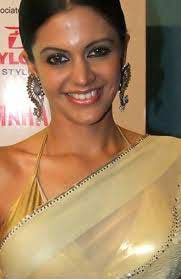 Popular cricket presenter and Bollywood actress Mandira Bedi wants to grow her hair and wants to look like a girl.

"I have experimented a lot with my looks. Now I want to grow my hair and want to look like a girl. Growing hair will surely take some time," said Mandira while talking to reporters after walking the ramp as a showstopper in a fashion show here.

She has experimented a lot with her looks which has metamorphosed her image from that of a girl next door in the title role of mega serial ‘Shanti’ to a sexy cricket presenter on television.

Mandira said whenever her husband introduces her to friends "he says meet my 'chota bhai' (younger brother)".

"That is the reason I want to grow my hair and look like a girl," added Mandira.

Mandira Sunday walked the ramp as showstopper at the sixth edition of the Seagram’s Blenders Pride Fashion Tour in Kolkata.
Posted by Indiblogs at 3:18 PM