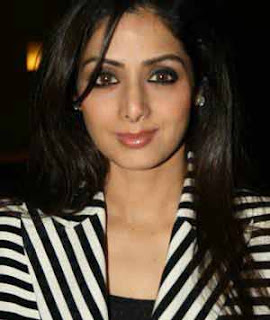 Bollywood actress Sridevi, who walked the ramp for ace designer Neeta Lulla as the show stopper at the Lakme Fashion Week, came across as very nervous and saved herself twice from falling flat on the ramp.

The beautiful actress, who was sporting a silverish-grey body-fitting gown made an impressive entry on the ramp but soon her nervousness came to the fore as she was found struggling with the train of her dress.

However, the actress still found the experience of walking the ramp quite pleasant. "It was great but at the same time very hard for me," she told reporters here.

The designer was elated too and revealed: "It was fantastic that on my 25th anniversary Sridevi walked the ramp and so many people actually made it to the show."

When asked about the actress' nervousness, Lulla clarified: "As far as I think, it happens some times when you walk the ramp after a long time."

Lulla's show, which showcased a collection inspired by the repository of work done by her over the last 25 years in both prêt as well as couture, boasted of Bollywood celebrities like Rani Mukherji, Hema Malini, Yash Chopra, Mugdha Godse, Tabu, Juhi Chawla and Amisha Patel, among others.

Actors Akshay Kumar, Rannvijay and director Vipul Shah also came down to attend the show in a retro avatar to promote their forthcoming film "Action Replayy". The film also stars Aishwarya Rai and is slated to hit screens Nov 5.

"I really enjoyed the show. Till this Diwali, I will come only in retro look. I don't think any look has been as good as of the 1970s," Akshay said.

As far as the collection goes, the ensembles were a mix of western and Indian designs in a deluge of colours including beige, silver, yellow, orange, green, blue, pink, lilac and red.

Embellishments and Swarovski crystals were also used to marl the silver jubilee of the brand.
Posted by Indiblogs at 4:51 PM

Email ThisBlogThis!Share to TwitterShare to FacebookShare to Pinterest
Labels: Sridevi