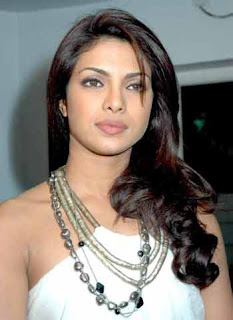 Priyanka Chopra had a close encounter with some overt amorous attention in Rio de Janeiro where she has just packed up shooting for a reality show.

A local hot-blooded well-to-do businessman, apparently of substantial good looks, insisted on trailing her everywhere with his marriage proposals.

Even while boarding her flight for the 25-hour journey back to Mumbai Wednesday morning, Priyanka anxiously looked back to see if the Brazilian suitor was still following her to India.

"Brazilian men turned out to be a little too upfront for me. They don't waste time in making their moves. This one didn't ask me out. He asked me to marry him right away. I don't think I am interested in marrying any foreigners. Only an Indian guy for me, thanks," Priyanka said.

One reason why she got so much male attention from the locals was her Brazilian tan. "I was bronzed, tanned and dressed rather Brazilian. Maybe they mistook me for a local girl," says the actress.

Exhausted Priyanka was in no mood to get jetlagged on her flight back to Mumbai. "The minute I land, I start promoting my new film 'Anjaana Anjaani'. After a fortnight, I head to Berlin for shooting Farhan Akhtar's 'Don 2'. I don't even have time to spend with my family. I missed them in Rio. I am going to sleep the minute the plane takes off," Priyanka said.

Looking back at the experience of hosting "Fear Factor: Khatron Ke Khiladi" Priyanka said: "I was determined I'd be stern, authoritative and in-charge. Nobody should think I should be soft because I am a woman. At the risk of offending the contestants, I was at my bullying best."

Priyanka regrets not being able to find enough time to spend with the contestants. "There was just time to shoot the stunts. I had just one day off and I decided to de-stress on the beach. I didn't get any time to shop and bought the famous Brazilian Hawaiian slippers only at the airport."

She got along well with all the contestants but confesses to having developed a soft corner for Manjot Singh. "I nicknamed him Komal Khiladi. And the most heartstopping moment of all the stunts was when Navjot fainted in the freezing water."
Posted by Indiblogs at 4:42 PM