Ranbir Kapoor to be next Amitabh Bachchan 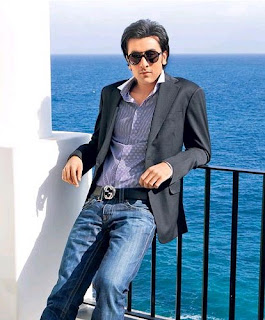 After working with Ranbir Kapoor in two films, director Siddharth Anand feels the young actor has the potential to follow in the footsteps of megastar Amitabh Bachchan as the "complete Hindi film hero".

"The day Ranbir does an action film and does it well, he has the potential to fill the void that Bachchan created," said Anand who teamed up with Ranbir for the second time for his new romantic comedy "Anjaana Anjaani" releasing Sep 24.

The two had earlier worked together in "Bachna Ae Haseeno" (2008). Ranbir, 27, is the son of well-known Bollywood actors Rishi and Neetu Kapoor.

"Ranbir is the perfect guy to play Anthony (a character played by Big B in 'Amar Akbar Anthony'), he can play coolie, he can play the characters Bachchan played in his prime. There is no one else but him," Anand told IANS.

"He has got everything it takes to be the complete Hindi film hero that Bachchan was."

Anand, who debuted with "Salaam Namaste" (2005), says he has tried to push the boundaries with his first film and completely smashed it with "Anjaana Anjaani".

"I have torn the boundaries here. When you see the film, it's something unlike you have seen at any point of time. It's a love story but its situations are very unique," said the young director.

"I made Ranbir do strange things. During the shooting of the song "Khuda jaane" in 'Bachna Ae Haseeno' I made him stand on the tip of a cliff and spread his arms and he was shit scared as he has a vertigo problem.

"In 'Anjaana Anjaani' there is a sequence where they are stranded in the middle of an ocean. It was the Pacific Ocean and he had to dive into the freezing waters. He did it even though he has aquaphobia," said the director.

Talking about the film that co-stars Priyanka Chopra, he said: " 'Anjaana Anjaani' is the story of two strangers who meet in strange circumstances and then part as strangers. So it's a very unique concept for a Hindi film, but it's deep-rooted as a Hindi commercial film. It has songs, stories, beautiful locations and fabulous performances."

Siddharth says more than the actresses, he bonds well with actors.

And what made him pair Ranbir with Priyanka?

"I wanted to have a virgin pair. I wanted a brilliant actress because the film is only about the chemistry between two people. It's about their sparks, what they speak, and the banters to and fro.

"Ranbir is a brilliant actor; so I needed someone who would be able to match that. Priyanka just fitted in unbelievably," said Anand.

The director insists that he is very particular about the songs in his films.

"I'm surprised people liked the song 'Hairat'. I was very clear that I wanted music for a love story that you cannot imagine. It doesn't belong to a love story. I didn't want mainstream music," said Anand.

Asked if he was planning to explore only unique love stories, he said: "Not really. I am a storyteller. If I am in a mood to make you laugh, I will tell you a joke. If I want to scare you, I will tell you a horror story. So it depends on what comes to me at that point of time."
Posted by Indiblogs at 3:25 PM