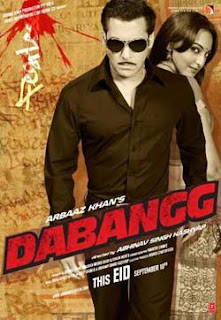 The footfalls at Pakistani cinema halls went down when Indian movies were banned during the Eid period, but Salman Khan-starrer "Dabangg" has created a buzz and moviegoers are once again thronging the theatres.

Produced by Salman's younger brother Arbaz Khan, the funny cop drama with a catchy storyline and enchanting music has not only enthralled audiences in India but also witnessed an overwhelming response in Pakistan.

Rizwan, a booking clerk at Cinestar cinema in Lahore, said the movie was released in Pakistan Sep 17, a week after its India release, and "families have started returning to the cinemas for Indian movies. The cinema hall is more than 70 percent full during all 'Dabangg' shows."

Ever since then president Pervez Musharraf lifted more than four decades of a ban on Indian movies three years ago, the Pakistani cinema halls have got a new lease of life.

The lack of competition and the declining standards of local movies have created a huge vacuum for movie lovers, which is now being filled by Indian movies. The dwindling film industry in Pakistan produces only a handful of low-budget movies every year and fails to garner a satisfactory response at the box office due to poor quality.

Arif Khan, owner of Gulistan cinema, said: "The cinema-going culture has been revived ever since Indian movies started screening in local theatres. Hardly 8-10 movies have been produced in Pakistan during the first nine months of 2010 while 25-30 Indian movies have released during the intervening period," he said.

Khan said a couple of Pakistani movies were released on Eid last year and generated a rush during the holidays. "However, as soon as the holidays ended, the trend again went down," he recalled.

This year too the government did not allow the screening of Indian movies on Eid in a bid to give breathing space to the local industry.

"Had Indian movies run simultaneously with Pakistani flicks on Eid, I am sure the rush would have been diverted to the Indian hits," Khan said.

"Other than 'Dabangg', 'Once Upon A Time in Mumbaai', 'I Hate Luv Storys' and 'Housefull' have also fared well at the box office in the recent past," he stated.

A booking clerk in DHA cinema said: "The ticket prices ranged between Rs.300 and Rs.500 for Indian movies, relatively high considering almost half the rates for Pakistani movies, but that failed to dent the eagerness of the public."

Several cinema houses have been built in posh localities to cater to the taste of the masses after the revival of Indian movies.

"The revival of cinema in Pakistan has to be credited to Indian movies," Arif said adding that the debate on whether it should have been allowed in the first place had more or less settled down after seeing the response.

There were more than 50 cinemas in Lahore, considered the cultural capital of Pakistan, but the number has gone down to just 14 because the remaining were converted to shopping malls and restaurants due to poor business.
Posted by Indiblogs at 5:09 PM