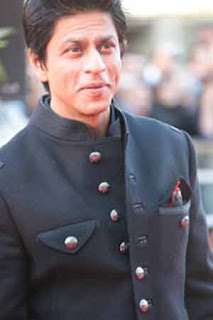 Bollywood superstar Shah Rukh Khan, who has donned the garb of a superhero in "Ra.One", says his new film is dedicated to all the fathers in the world.

"Ra.One is a simple story of a father and a son. There have been a lot of movies and songs dedicated to mothers but unfortunately, fathers are ignored. I being a father myself and a part of cinema, decided to give them all some space through my film," Shah Rukh told reporters here Sunday.

"The film is dedicated to all the fathers in the world. I hope this film will help bring fathers at the front and make me a hero in the eyes of my son," he added.

The actor, who has two children - son Aryan, 13, and daughter Suhana, 10 - with wife Gauri Khan, was named the global ambassador of Kingdom of Dreams situated in Gurgaon. Dressed in a black suit, shirt and tie, the star dazzled in his newly-acquired leaner look.

Shah Rukh will also be seen doing some daredevil stunts in the film.
Posted by Indiblogs at 3:39 PM