Singer Bret Michaels to undergo surgery for hole in heart 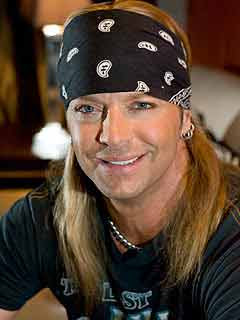 Singer Bret Michaels is set to undergo further surgery in January 2011 to repair a hole in his heart.

The 47-year-old rocker, who has type one diabetes, has been riddled with health woes in recent months.

He suffered a near-fatal brain hemorrhage in April this year, just weeks after undergoing an emergency appendectomy and then suffered a minor stroke. During his hospitalisation, doctors discovered a hole in his heart that he'd had since birth, reports aceshowbiz.com.

Michaels confirmed his health problem and indicated he was taking a regimen of blood thinners to treat it. And now he is scheduled to go under the knife to repair the defect - after his Roses and Thorns tour wraps in December.

"It's for the hole (in) his heart," said Michaels
Posted by Indiblogs at 3:14 PM