Suniel Shetty not to do supporting roles any more 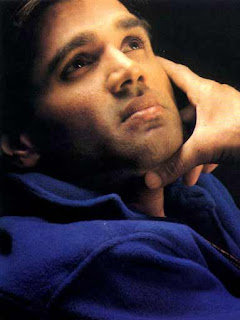 Suniel Shetty, who has been saying no to a lot of filmmakers, has turned down the offer from his favourite director Priyadarshan because the role didn't shape up to his satisfaction.

"The role did not shape up either to Priyan's or my satisfaction. So we decided to part ways on this one. In fact, Priyan himself suggested I pass this one," said Suniel.

Priyadarshan's new film features Ajay Devgn, Anil Kapoor and Kunal Kapoor, among others. Suniel had been all but finalised for one of the pivotal parts.

So is there any ill-will between Priyan and Suniel over this matter?

"None at all. Priyan and I go back a long way. I've always done whatever he has offered me. But now it's time for me to think about the next level in my career. I can't be doing supporting parts any more," said Suniel.

After the much-acclaimed part in "Red Alert", there will be no more peripheral parts for the actor. At the moment Anees Bazmi's "Thank You" is his last assignment on hand.

Suniel has returned from a long schedule of Anees Bazmi's "Thank You" with fond memories of his birthday in Toronto Aug 11.

Co-star and friend Akshay Kumar threw a surprise party for him.

"He didn't only arrange the party, he looked into the minutest detail including the food I like. Akki knows I don't drink. So he had arranged my favourite fruit juices. It was just a small party with our friends like Bobby Deol and Anees Bazmi. It was a memorable evening."

"We started our careers at around the same time and we've done any number of films together. But do supporting parts with him? Thank You, but no thank you," he said.

It seems now that his two children are stepping out of adolescence, Suniel wants to spend as much time with them as possible before they leave home. His daughter will be attending college next year.
Posted by Indiblogs at 3:59 PM