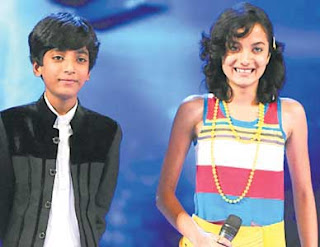 The combination of Akansha, 13, from Amritsar and Rouhan, also 13, from Lahore beat other two finalist pairs Rishabh Chaturvedi-Farrukh Ali Moon and Sayantan Paul-Ahsan Ali to walk away with the title of "Chhote Ustaad" and a cash award of Rs. 20 lakh.

Judged by singers Sonu Niigaam and Rahet Fateh Ali Khan, the show brought together raw talent from India and Pakistan in the age group of 8-13 years.

The show began with 10 pairs, an Indian and a Pakistani singer each, which over the period of three months and stiff competition came down to the final three.

The show was hosted by Abhas Joshi and actor Omi Vaidya.
Posted by Indiblogs at 11:27 AM