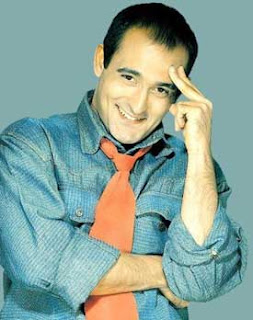 Talented Akshaye Khanna has come out of his cocoon to promote his forthcoming thriller "Aakrosh", but the low profile actor admits he loves dodging the media glare and enjoys being invisible.

But he doesn't mind bending rules to promote his releases. "Definitely, when my film is about to release, I do whatever I can."

"In my invisible time, I watch a lot of movies, I read a lot, I have friends and family so I spend time with them and I sleep to the fullest. That's what I enjoy," said the actor who was launched by his actor-politician father Vinod Khanna with the 1997 movie "Himalaya Putra".

"I believe in today's time it's better to sit at home than do a bad film. I'm very satisfied with my career. It's been 16 years since I gave my first shot. It's been a long time. In a population of one billion, very few people get this opportunity to work in films. So I feel very blessed. It's not easy to survive as an actor. So I'm very happy," added the actor.

Akshaye, who was last seen in the 2009 release "Shortkut - The Con is On", is looking forward to his first release of the year "Aakrosh".

Releasing Friday, the action drama that revolves around honour killings will see Akshaye working with Ajay Devgn after a gap of eight years. The two were last seen in the 2002 film "Deewangee".

"I've got back with Ajay in a film after eight years. In fact, I told him recently that we should work together more often. Apart from having a very good personal relationship, I think we share a very good chemistry on screen.

"We work well together as actors and there is a comfort level between us and I think that's very important," revealed Akshaye, who is playing a cop in the film, directed by Priyadarshan.

Asked whether he would like to get into production or direction like his contemporaries, the actor refused.

"I have no plans to get into direction or production. I just don't have any inclination. Some people have and they feel that one day they will direct a film, but I don't have any such wish. I'm very happy being an actor."

After "Aakrosh", the actor will also be seen in Farah Khan's directorial venture "Tees Maar Khan" at the end of the year.
Posted by Indiblogs at 11:05 AM