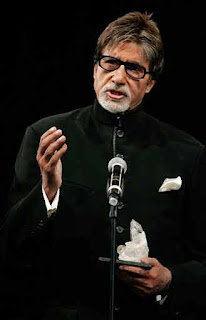 Bollywood megastar Amitabh Bachchan Friday received a standing ovation from the audience as he walked on to the stage to receive the best actor award for "Paa", his fourth National Award.

Amitabh, 68, received the award from President Pratibha Patil for his performance as a 13-year-old progeria patient in R. Balakrishna's "Paa". He had earlier won the award for "Saat Hindustani", "Agneepath" and "Black".

Made at a budget of Rs.15 crore, "Paa" was produced by AB Corp and distributed by Reliance Big Pictures. It also won the best Hindi language film award.

The entire Bachchan family including wife Jaya, son Abhishek, daughter-in-law Aishwarya Rai and daughter Shweta Nanda were present at the ceremony.
Posted by Indiblogs at 4:19 PM