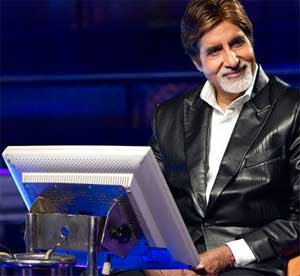 Amitabh Bachchan, the actor of the masses, wants to reach out to people in the

interiors as the host of "Kaun Banega Crorepati" (KBC). He says this time viewers will get to see some of the
best brains from small towns.

"For some peculiar reason, a certain section of our country was alienated whenever 'Kaun Banega Crorepati'
was held," Amitabh told IANS in an interview.

"Now because of rapid growth in mobile and internet, a large section of people that is not necessarily from urban
areas but from midtowns, smaller cities and even rural areas, is conversant about what's going on in the rest of
the world. Not only are they conversant, they have every knowledge about it.

"There is a great effort on their part to improve their conditions and some of the contestants, from several
recordings that I have already done, are from either very small villages or small towns but they are very
enthusiastic and very knowledgeable and have gone on to win Rs.300,000 and Rs.700,000. One of them even
won Rs.25 lakh.

"But sadly what's happening is that even though they are educated, they can't go beyond a certain level because
they don't have the finance," he said.

KBC 4 will go on air on Amitabh's 68th birthday, Oct 11, on Sony and the Bollywood megastar says returning
to the hot seat felt like dejà-vu. He was the original show host, while Shah Rukh Khan took over for the third
season.

"Yes, of course, there is a feeling of having been there before. But every day is so new in KBC, the type of
contestants, what he is going to say, how far he is going to go -- makes it more interesting. It's the contestant
that makes the show, not me.

"There are many things that I don't know. Almost 90 percent I don't know but, yes, it's always very educative,"
he said.

Having done it before, Amitabh still goes for rehearsals.

"Nobody is ever going to be perfect, least of all me. And I think it's a fallacy to think that we know everything
and therefore we don't need any rehearsal. For anything that's going to be public, I want to be absolutely sure
what I am going to do and what the mechanics of the show are. No amount of preparation is going to be enough
for something like this.

"You may think I have worked in about 200 films and have been working for 41 years, so going in front of the
camera is a cakewalk for me; no it isn't so. I still have butterflies in my stomach every night when I have to go
for shoot next morning.

This time too Amitabh would avoid watching the show with his family.

"I have actually kept away from watching KBC with the family because I am too scared to sit with someone to
watch it. I would retire to some corner of the house where I can't hear or see anything and wait for the report to
come from the rest of the family.

"I think I would be doing something similar this time also," said Bachchan.
Posted by Indiblogs at 11:48 AM