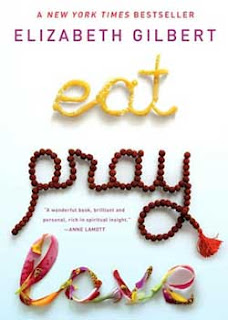 
The modern man, in the rush for modern conveniences, is successful, but fails in acquiring for himself what is perhaps the most important of all - a little peace of mind. We desperately try to fill in for this lack by economic prosperity. Sadly as the old adage says, money may buy you a little pleasure, but not happiness or peace.

Liz (Julia) is a successful and visibly happy American woman who has a fairly loving husband and a great career. What she does not have is a sense of connection to herself or fulfilment in life. So, one fine day, she tells her husband she no longer wants to stay married.

After a rebound relationship with an actor, she goes globe trotting - first to Rome, then India and finally to Bali, Indonesia. Does she find what she was looking for? It's Hollywood. Of course, she does.

There are many flaws in "Eat Pray Love", both as a story, as well as a cinematic conception. First of all, the movie begins jarringly, and there is no explanation to Liz's unhappiness with life. Her quest thus seems not so convincing to a viewer. A little more attention to her past life would have helped.

The pace and movement of the story is also uneven. There's no scheme employed in the use of flashback as they pop up at odd times. The editing is rough and a little less dialogue with much less screen time would perhaps have made it a better film.

The film also enforces stereotypes of the places it travels to - Italy is shown as a country of hot men and sex, India is a country of spirituality and elephants, and Indonesia that of exotic beauty. While there may be nothing wrong in building the film's foundation on such pointless stereotyping, refusing to go further is myopic.

Julia is her usual good self, sad and smiling in equal measure. It is the direction that lets you down. Despite being based on a witty and intelligent book of the same name by Elizabeth Gilbert, director Ryan Murphy fails to connect the film with the viewer. It is perhaps due to the liberties the film takes with the original story.

The protagonist has problems that many in the modern world do, but the translation of it on screen fails miserably. The film thus feels like many run-of-the-mill and confused self-help books that harp on one thing repeatedly but really mean or elucidate nothing.

Yet, if one were really to look at the message of the film, one could see it as a criticism of the American way of life. Liz's sojourn in Italy could be seen as an analogy for beauty, that in India of spirituality, and in Bali of the original, exotic nature inherent in each one of us. These are missing in the modern American city life.

Sadly, "Eat Pray Love" is not the vehicle to drive home the moot point into American minds and thus the only redeeming factor of the film also falls flat on its face.
Posted by Indiblogs at 12:38 PM