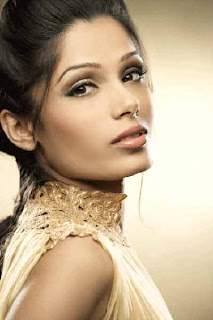 Freida Pinto is out to prove she's no one-film wonder with her performance in "Miral", based on Palestinian journalist Rula Jebreal's semi-autobiographical novel. The actress believes in speaking through her work and says she won't mind working in an Indian film -- provided she falls in love with the script.

"If Indian films came my way and I loved the script, I would say yes. Quite contrary to what people believe, I haven't said yes to every international script that has come my way. I have said no to quite a few. Similarly, unless and until I fall in love with the Indian script, I will not do it," Freida told IANS in an interview here.

Screened in the Narrative competition section at the Abu Dhabi Film Festival, "Miral" that opens in Jerusalem in 1948 is the true story of Hind Husseini, who turns her family home into the Dar Al-Tifl Al-Arabi Institute, providing hope and education to orphans, especially girls. Freida's character too grows up in the same orphanage.

The film is directed by American artist and filmmaker Julian Schnabel and Freida says he cast her after seeing her in "Slumdog Millionaire".

"I auditioned for it, Danny Boyle put me on tape for this because Julian requested us while we were doing a press junket for 'Slumdog Millionaire' in LA.

"I read the script and I completely fell in love with it. I felt this story definitely needed to be told to the world. I was getting an opportunity to be part of a story that talks about peace, so why not? That's how the film happened."

The 26-year-old speaks English with a Palestinian accent in the war film. "I'm lucky, I can do accents well. I can listen and I can repeat what people say. So Julian set me on a mission - I didn't have an accent coach, I had real people to learn from. I went to the old city of Jerusalem, stayed with a Palestinian family for eight days.

"I also went to the orphanage where Rula grew up. I picked up whatever I could from the students and local people. I recorded everything and found out words that are common and found my own accent. That's my take on my Palestinian accent," she said.

The actress says she doesn't have to prove anything to anybody back home and hopes Indians watch "Miral" since it talks about peace.

"I never had to prove myself while doing 'Slumdog…' either. When the film went out, it did the best it could and did really well and that's the story of my life. I didn't have to go out of my way to prove a point in my first film, I don't have to do it in any film," said Freida.

"I would definitely want to show 'Miral' to India, but not to prove a point...the film (is) about peace which is so relevant in my country and in the countries that are warring or have some kind of conflict with neighbouring countries," she said.

Freida also got lucky to work with star Hollywood filmmaker Woody Allen in "You Will Meet a Tall Dark Stranger".

"I auditioned for Woody Allen's film too, quite contrary to what people think that these roles just fell in my lap. He saw me in 'Slumdog Millionaire' and thought I would be great in that part. But he made me audition because he needed to know I'd be able to do it.

"He is definitely very unique and a genius in what he does. What's most amazing about him is that he will take up serious and disturbing topics and punch the right amount of humour in it, which makes the film so much enjoyable and less depressing."

So what are the other international projects in her kitty?

"I have worked with Tarsem Singh in 'Immortals'. It's a Greek epic. I play Phaedra, the oracle. Again there is no ethnicity to the character - she could be from any part of the world. The film is so multicultural that we never talk about ethnicity, though we talk about Greek places. We shot in a studio in Montreal and it's in English. I did speak a bit of ancient Greek," she said.

"I also did a film called 'Rise Of The Apes' with Rupert Wyatt. It's a prequel to 'Planet of the Apes'," Freida said.