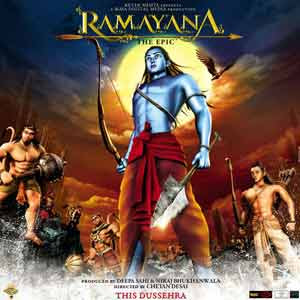 It is a story passed on for millennia. And through the ages, it has either shown people the way or in the hands of fanatics led to distress and destruction. And yet, the story can be interpreted in many ways. Sadly, "Ramayana" isn't that and manages only to affirm cliches.

Exiled prince Ram (Manoj Bajpayee) of Ayodhya has taken the help of an army of apes to fight a formidable foe Ravan (Ashutosh Rana) after the abduction of his wife Sita (Juhi Chawla).

A major flaw of the film is a lack of guts, and its affirmation of stereotypes - be it of animation, the story of Ramayana or its characters. Thus, the heroes are faultless and the villains have no redeeming qualities.

This black and white simplification is also factually incorrect as the character of Ravan in the most popular versions of the epic is not entirely evil, but is a knowledgeable scholar flawed by his vanity.

Rather than displaying the prowess of Indian animation, "Ramayana" ends up becoming a show of strength for Ketan Mehta-owned Maya Digital Media. And though it's below global standards, it's still India's best product in its category.

The other thumbs up you can give this film is that it is low on Ram and religious rhetoric.

In a story whose mythology and religion is based on the stated perfection of one man, this is hard to do. Instead of becoming simply a religious film, it does manage to become a story of a man.

What is often jarring though is its dialogue. Though attempts have been made to keep it pure, many Urdu words creep in, denoting sloppiness from its writers.

Why the animation is far from reaching global standards, you can tell by watching the first few minutes of the film.

Though the detailing is far superior to most other animation films in the country, it fails to give depth and expression to the faces of its characters. And a story filled with such pathos cannot afford to do this.

Also, in many ways, "Ramayana" reaffirms Hollywood animation stereotypes. And that lack of thought and vision has been the bane of Indian animation.

Unlike the Japanese, who have made their own style of animation that is now the toast of the world, India has so far failed to go anywhere besides some notable baby steps. And this, despite the world's greatest collection of mythology, fables and different, ancient artistic styles to choose from, seems an inexcusable error.

Like the ignited tip of a firecracker in a dark night, "Ramayana" manages to sparkle with the possibility of brilliance, both in animation and in the way it tells an old story, but it is a bomb that fails to burst. And that, depending on your outlook, could be either just sad, or a major setback for animation in the country.
Posted by Indiblogs at 5:08 PM