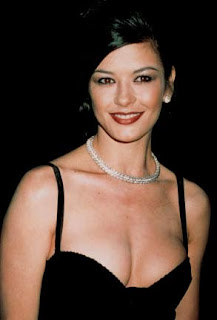 Hollywood actress Catherine Zeta-Jones has praised her husband Michael Douglas for the bravery, "great strength and dignity" he has shown in his battle against cancer.

The 41-year-old actress said her 66-year-old actor-husband - who is currently undergoing radiation and chemotherapy - is "holding up very, very well" despite the severity of the illness.

"Everyone couldn't be happier with his progress. He's holding up with great strength and dignity," contactmusic.com quoted her as saying.

Catherine who is from Wales, where the Ryder Cup golf tournament is being held, was due to be accompanied by Michael for the event, but he had to stay in the US with their two children - Dylan and Carys - to continue his treatment.

"Michael will be glued to anything that has a golf ball and a club, especially the Ryder Cup. Usually I would be watching it with him. He would be representing the American team and I would be wholeheartedly representing the European team, but not this year, maybe next time," she said.
Posted by Indiblogs at 11:54 AM