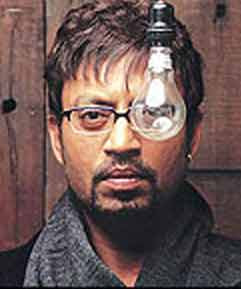 Irrfan Khan has managed to make a name for himself in Hollywood as well as Bollywood. As his latest foreign venture "Hisss" is set to release, he says the industry abroad is much more planned, but in India anybody can give suggestions and directors take it.

"The basic difference is that they (Hollywood) plan a lot, their working atmosphere is quite compartmentalised, everybody is responsible for their department," Irrfan told IANS in an interview here.

"They are more like machines. The person who does a particular job knows only about that, he doesn't have wholesome knowledge. But in India we work in a very cordial manner, here anybody can give a suggestion and directors take it," he added.

He became a prominent face in international cinema after acting in films like "Warrior", "A Mighty Heart", "New York, I Love You" and Danny Boyle's multiple Oscar winning film "Slumdog Millionaire".

He will soon be seen in "Hisss", directed by American Jennifer Lynch and slated for release Oct 22. The film is about a snake woman played by Mallika Sherawat who is out to take revenge and also stars Divya Dutta.

The actor, who was in Gurgaon to promote the film, was all praise for the director.

"Working with Jennifer was a brilliant experience; the way she saw the story, which we have been listening to and watching on the big screen for years here, is amazing. The film has marvellous special effects that would definitely shock you," he said.

He also made an observation about his co-star. "Mallika knows how to come into limelight. She has this talent and she must utilize it," Irrfan told IANS.

Known for his unconventional looks, the 48-year-old actor has worked in movies like "Haasil", "Rog", "New York" and "Maqbool".

Last seen in "Slumdog Millionaire", the actor has just completed a TV series called "In-Treatment" which stars Gabriel Byrne and Debra Wenger. It is a series about therapists and patients.

Irrfan says he is happy the way his career is shaping up and the kind of films he has been doing.

"I am happy with the kind of films I am doing. I am getting subjects which I want to do; that's enough for me," he added.

The actor is gearing up for the release of director Mani Shankar's new film "Knock Out", which also stars Kangana Ranaut and Sanjay Dutt and will release Friday. The film is about people who have amassed illegal wealth in India and have many secret bank accounts across the world.

Irrfan, who plays the role of an investment banker, will be seen sporting long hair in the film.

"I wanted to experiment with my looks for the character but our producer Sohail Maklai was a little apprehensive. I told him 'let me work out, see me in the look and then take a call.'

"And when I came out in the look, they said this is it. This is what we wanted to have," laughed Irrfan.

Meanwhile, Irrfan has a bag full of films. He is currently working on "Paan Singh Tomar", "Yeh Saali Zindagi", "Saath Khoon Maaf" and "Thank You".
Posted by Indiblogs at 3:48 PM