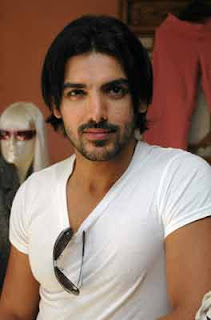 John Abraham has a physique that every man would love to possess, but the actor says he does not want his physical attributes to overshadow his performance, something he works equally hard at. He's happy that this trend is reversed in upcoming film "Jhoota Hi Sahi".

"My physicality takes over a lot. It just preceeds over what I do. Even if I'm doing a sweet role, there is someone who would find it hot. I'm not apolegetic about the way I look, but somewhere down the line the physicality keeps coming to the forefront," John told IANS in an interview.

"So I'm trying to work around a parallel road where my performances are as much seen... because I really work hard for them," he said.

The actor's wish could well be fulfilled in Abbas Tyrewala's "Jhoota Hi Sahi", since he has kept his well-toned body and macho look on the back burner and plays a normal guy who works in a book store. The film is slated to hit screens Friday.

"When I saw the film, I fell in love with my character because this is probably the only film of mine where I have seen the first three minutes of the film looking at John Abraham on screen and after that I forgot that it's John and I was concentrating on only Sid (the character) and that's the victory of the character and the director," he added.

"Abbas used to follow me to the gym, then it got too much. He used to say: get out of the gym. He said he wants a guy who is completely soft in his body, just very normal, who works in a book store.

"But I wanted to gym at least a little bit because I'm an ectomorph. I have a tendency to lose weight, so I started losing weight and Abbas was very happy. When I saw the film, I hugged him and said 'thank you for not allowing me to work out'," John said.

But wasn't he skeptical about changing his look for a film?

"Every actor has got the fear of change and what happens is that some of us succumb to that fear and say that we want to stay within that zone that people like us in.

"Some of us want to get out and take a risk, now whenever the going is good for me in terms of a look, I keep changing it and I enjoy that space. When I had long hair, people liked it a lot and a lot of people started keeping long hair but then I went ahead and changed it," John said.

John was also proud of the fact that the film got a U certificate from the censor board.

"This film has just got a U certificate. It's absolutely clean. It doesn't have foul language, doesn't even have a villain and it's the cleanest, most beautiful film. Even the members of the censor board said that after long, we have seen a film so clean without any double meanings," the actor said.
Posted by Indiblogs at 5:04 PM