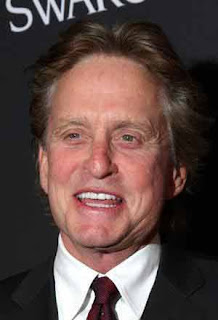 Hollywood star Michael Douglas says he was worried about revisiting his "Wall Street" character Gordon Gecko as it was quite "nerve wracking".

The American, who returned to the iconic character for sequel "Wall Street: Money Never Sleeps" this year, says the character had lost many of his trademark characteristics, reports celebrifi.com.

"When director Oliver Stone offered me the part in the first film, I don't think I was necessarily the first choice. Maybe the third. It was a crucial time in my acting career, 23 years ago, and played a very important part. Also the part was very colourful. The decision to strip Gecko of all his accoutrements and the armour, all the stuff that made him so colourful, was little nerve-wracking," he said.

"I think we were all a little insecure whether that was actually going to fly or not, whether we could take away everything from him. Hopefully I've improved in 20 years - just like an old car," he added.
Posted by Indiblogs at 3:21 PM