'The Other Guys' Movie Review 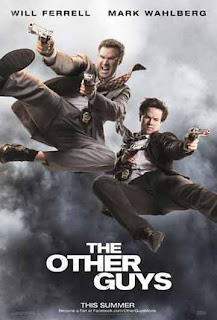 Allen (Ferrell) and Terry (Wahlberg) are two cops in New York Police department, who are the laughing stock of their department. Allen is nerdy, while Terry has anger management issues. After the 'funny' demise of two star cops there's competition about who will fill their gaps.

After many false starts where they further become the butt of jokes, they finally discover their groove as individual cops and as a team. What their pointless investigation seems to be leading is into the mouth of a big corporate scandal.

The strength of the film is not its originality. Two nerdy cops proving heroes despite the odds have been done to death in both the comedy and the action genre, and in the action-comedy genre which this one is. Its strength is in three things -- a well- written screenplay, expert direction by Adam McKay (also its writer) and the comic timing of Ferrell and Wahlberg, which raises many chuckles and quite a few laughs.

Some scenes are outright hilarious -- the lion and tuna fight between the partners, the wooden gun, the villains taking away their shoes everytime they catch them and the third party exchange of sexual communication with an old woman as the messenger. A much older looking Michael Keaton as their captain who also moonlights as a sales executive adds to the fun.

Cameos by Samuel Jackson and Dwayne Johnson add to the zing. Eva Mendes has a small role and adds to Terry's amazement about his nerdy cop getting all the hot chicks.

"The Other Guys" proves that you don't necessarily have to be original to be funny. All you got to do is be creative with cliches. That is a lesson many filmmakers, both in Hollywood and Bollywood, would do well to remember.
Posted by Indiblogs at 4:32 PM

Email ThisBlogThis!Share to TwitterShare to FacebookShare to Pinterest
Labels: Hollywood, The Other Guys