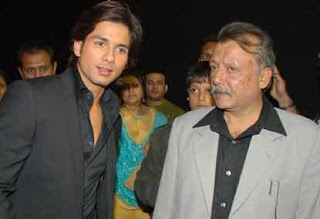 Pankaj Kapur is so busy with his directorial debut "Mausam", a film he hopes will take his son Shahid Kapur's career to greater heights, that his movie with filmmaker Bhavna Talwar has been delayed. But she's not complaining.

Talwar and Pankaj Kapur had earned rave reviews for "Dharm", the filmmaker's first venture. Now "Happi", their second outing together, was completed a year ago but Pankaj Kapur's dubbing needs to be done.

Apparently Pankaj had assured the director that the dubbing of "Happi", where he plays a common man on the streets of Mumbai inspired by Charlie Chaplin's characters, would be completed during a break between the schedules of "Mausam". But now he would be able to do so only after his directorial debut is complete.

"Pankaj-ji is not happy with the way some of Shahid's recent films have gone. He feels Shahid needs that one big epic push which 'Mausam' can give him. And Pankaj-ji wants to focus entirely on building that one monumental film which would put Shahid right up there where Pankaj-ji thinks his son belongs," a source said.

Interestingly, Bhavna Talwar's husband Sheetal is the producer of "Mausam". But Bhavna has no complaints and says she will wait for Pankaj Kapur.

"It's true Pankaj-ji has decided to focus on his project. Both my husband and I have too much respect for Pankaj-ji to question what he does. He took my first film 'Dharm' to great heights. Now he is not only directing his first film for us, but is also the lead in my second film. If I've to wait, I'll wait for as long as Pankaj-ji wants me to," she said.
Posted by Indiblogs at 4:15 PM